Interview with an astronaut 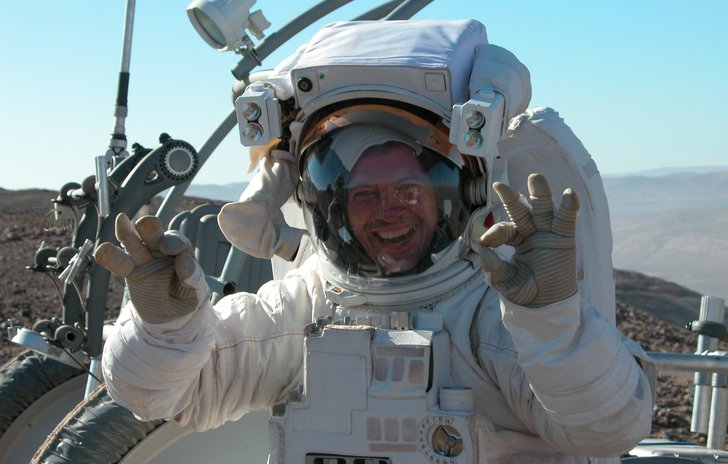 Dr Christopher Riley is a planetary scientist, author and director. pressing questions on space, the moon and how to become an astronaut.

How do you become an astronaut?

Traditionally, many astronauts worked for years as test pilots for the military, but today lots more of them have trained in STEM (science, technology, engineering and maths) subjects. This is useful because you have to carry out lots of science experiments on board the International Space Station, so studying these subjects and getting very good at them is the first step towards becoming an astronaut.

National space agencies like NASA take on some new candidates every couple of years to join their astronaut training programmes, but other companies are beginning to build their own rockets and spacecraft too, so this will mean there are more opportunities for becoming an astronaut in the future.

There’s one more route to becoming an astronaut – and that’s to become very rich and buy a private seat on one of these new spacecraft. It takes a lot of money or energy to hurl a person and all the things they need to stay alive off the Earth, but maybe one of you out there can work out how to make this cheaper and easier for all of us!

What is it like to travel in a rocket?

Rockets need to reach a speed of over seven kilometres each second to get into space and orbit the Earth. To do this the rocket needs to speed up very quickly, and that makes the ride into space a bit uncomfortable. If you’ve ever sat in a car as it accelerates away from some traffic lights fast you might know how it feels. Accelerating even faster in a rocket feels the same – only you are pushed back in your seat even more strongly, and for longer. You get thrown around quite a lot, but soon you’ll be high above your home planet with an amazing view!

Will humans ever return to the moon?

12 people walked on the moon between 1969 and 1972, but the rocks they brought back suggested that the moon was very dry. As water is too heavy to take from Earth, there would be no water for future astronauts to use so we decided to stop sending people there.

In the last couple of decades we have discovered that there’s lots of frozen water on the moon, and if you break it down it can also be breathed as oxygen. Rocket companies around the world are now trying to work out how to get to the moon to mine water ice, which is becoming a new space race. It’s this that will probably get humans back to the moon.

What is your favourite fact about space?

We all live in space. You can think of the Earth as a bit like a giant spaceship that 7 billion of us travel on each day. Every 24 hours we travel more than two and a half million miles through space as we orbit the sun on our planet-sized spaceship. So you’ve just travelled over 170 kilometres through space in the time it’s taken you to read this sentence!

At the same time we are orbiting the sun, our entire solar system is also travelling through the universe at a staggering 595 kilometres each second! But don’t worry. None of this will make you dizzy. We have evolved to live on spaceship Earth without being able to sense these incredible motions.

Will humans ever be able to have a holiday in space and what do you think it will be like?

A few privately-funded astronauts have been flying into space for many years. Some of them have paid up to $20m for a ticket, but these costs are about to come down. A company called Bigelow Aerospace, founded by budget hotel billionaire Robert Bigelow has just signed a deal with a rocket company called SpaceX to carry 16 tourists to the International Space Station on four separate flights in the coming years. Tickets for these trips will probably still be quite expensive – perhaps $8-10m for a week onboard the International Space Station - but these prices will eventually come down.

If we can work out how to successfully mine the water ice on the moon, then human habitats will eventually be built there in the coming decades. Perhaps people will visit these moon bases for pleasure in the future too. Maybe you could help to make this great dream a reality by becoming an engineer or planetary scientist yourself.

Where we Once Stood is by Christopher Riley, illustrated by Martin Impey and published by Harbour Moon Publishing.