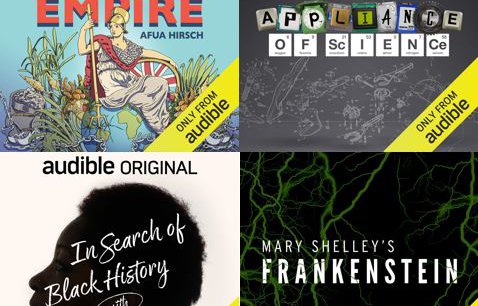 Inside Stories with Audible: an audiobook list chosen by young people in custody

Our Inside Stories with Audible project helps young people in custody develop their communication and literacy skills and improve their confidence through a range of audio activities. They get into reading with new access to audiobooks and podcasts by listening through new audio devices provided by Audible.

Here’s a selection of the titles chosen by the young people in HMYOI Feltham, which are available for them to listen to in their new audio corner in the institution’s library, provided for free as part of our project with Audible.

These audiobooks and podcasts are suitable for ages 16+. Please note that some stories address sensitive themes.

In trying to create life, the young student Victor Frankenstein unleashes forces beyond his control, setting into motion a long and tragic chain of events that brings Victor to the very brink of madness.

After Will's brother is shot in a gang crime, he knows the next steps. Don't cry. Don't snitch. Get revenge. This haunting, lyrical, powerful verse novel will blow you away.

Brief Answers to the Big Questions, the final book from one of the greatest minds in history, is a personal view on the challenges we face as a human race and where we, as a planet, are heading next.

The Science of Everyday Life by Marty Jopson (Audible)

In this fascinating scientific tour of household objects, The One Show presenter and all-round science bloke Marty Jopson has the answer to all of these and many more baffling questions about the chemistry and physics of the everyday stuff we use every day.

Across this five-episode series, Bill Bryson, with the help of The Science Museum's curators, takes us object-by-object through some of the museum's lesser known inventions and discoveries - and the human stories behind them.

Natives: Race & Class in the Ruins of Empire by Akala (Hodder & Stoughton)

In this unique audiobook Akala takes his own experiences and widens them out to look at the social, historical and political factors that have left us where we are today.

In Search of Black History with Bonnie Greer (Audible)

Bonnie Greer uncovers the lives of people of African descent that don't fit with the accepted history of Western Civilisation we've traditionally been taught. From saints, to philosophers, to warrior women and king's heralds - these people's lives have been lost, hidden and distorted down the centuries.

Through six intimate conversations with a new generation of writers and historians - journalist Afua Hirsch tries to break through old clichés, and unpick the true legacy of this complicated and difficult inheritance.

Days that Changed the World with Carrie Gibson (Audible)

Listen to history's unsung heroes who changed the world, in this powerful documentary series. Get closer to events you may only have heard about from school books with these first person accounts of key moments in recent

Way of the Wolf by Jordan Belfort (Simon & Schuster)

Immortalised by Leonardo DiCaprio in the hit movie The Wolf of Wall Street - this book reveals how to use the Straight Line System, the step-by-step sales and persuasion system proven to turn anyone into a sales-closing, money-earning rock star.

Robert’s story of growing up with two dads - his real father and the father of his best friend, his rich dad - and the ways in which both men shaped his thoughts about money and investing.

The Formula by Albert-László Barabási (Macmillan)

Unveiling the scientific principles that drive success, and how to leverage them, Barabasi offers a new understanding of the very foundation of how people excel in today's society, and how to harness these principles for yourself.

The Beast by Adebayo Akinfenwa (Headline)

Inspiring, entertaining and full of character, this is the story of how Akinfenwa became a true cult hero and the never-give-up attitude that made him the biggest footballer on the planet.

In this inspirational and straight-talking new book, Sir Alex reveals the secrets behind his record-breaking career.

Alex Ferguson wrote this book for his fans, addressing personal feuds, triumphs and highlights of his life on the pitch. A must-listen for football fanatics around the world.

A Life in Football by Ian Wright (Little, Brown)

Ian Wright's memoir is a thoughtful and gripping insight into a Highbury hero and one of the greatest sports stars of recent years.

Soccology by Kevin George (Own It!)

Invaluable for the modern footballer and fascinating for anyone intrigued by the incredible connections between the heart, mind and body, Soccology contains lessons far beyond the beautiful game in how to be the best version of ourselves.