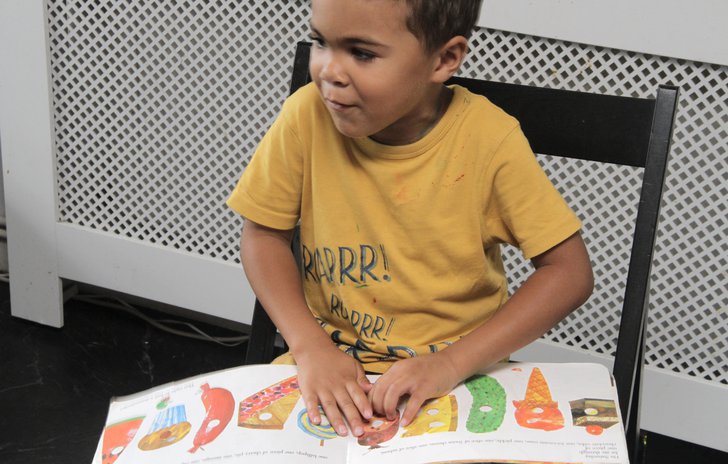 Help your child have big dreams about their futures with this book list all about jobs and people with interesting job roles.

This book is accurate enough to satisfy an expert but is simple enough for babies! It explores the basics of flight from birds to planes to rockets, and ties it all to a baby’s world.

Topsy and Tim Meet the Police
By Jean Adamson

When Topsy and Tim’s class is visited by two police officers, they hear all about what their jobs involve. The twins find out about stranger danger, learn about safe places to play, and even get to visit the police station themselves when they find somebody's belongings.

Mog and the Vet
By Judith Kerr

One day Mog is chasing a butterfly when something happens to her paw – and she needs to visit the vet. But Mog hates going to the vet and before her paw can be made better, she causes great confusion in the vet’s surgery…

Maisy is going to the moon! Little readers will love pulling the tabs to help her rocket blast off, move Maisy’s vehicle over the moon rocks and open a parachute that helps her land on Earth.

Astrid has always loved the stars and space. "I want to be an astronaut!" she says. While Mama is away, Papa and Astrid have fun acting out the challenges an astronaut faces on a space mission - eating food from a tube, doing science experiments, living and sleeping in near-zero gravity. Astrid can do it all! Then it's time to meet Mama at the airbase. But where has Mama been?

Rocket to the Moon!: Big Ideas that Changed the World
By Don Brown

On July 20, 1969, Neil Armstrong took “one small step for man, one giant leap for mankind” when the Apollo 11 landed on the moon. But it wasn’t just one man who got us to the moon. This book explores the people and technology that made the moon landing possible.

Izzy Gizmo loves to invent, but her inventions never seem to work the way she wants them to and that makes her really cross. When she finds a crow with a broken wing she just has to help. But will she be able to put her frustrations to one side and help her new friend to fly again?

My Mummy is a Plumber
By Kerrine Bryan

This book introduces children to the world of plumbing through fun rhyme and colourful illustrations. Mummy is always saving the day with her plumbing skills! She helps Mrs Platt from the upstairs flat, whose nail goes through a pipe, and Suzy Pane from Chudberry Lane, whose toilet has got blocked!

Destiny the Pop Star Fairy looks after all pop stars in Fairyland and the human world. So when things start to go wrong for her friends’ favourite pop group, The Angels, Destiny needs their help to fix things before The Angels' concert is ruined!

This brilliant picture book provides a visual treat for readers, young and old. With a new environment on every page, Zoo-ology is filled with different species from the aardvark to the zebra in a zoo without bars.

Violet the Pilot
By Steve Breen

By the time she's two years old, Violet Van Winkle can fix nearly any appliance in the house and by eight she's building elaborate flying machines from scratch. The kids at school tease her, so maybe she could earn their respect by winning the blue ribbon in the upcoming air show, or something involving her best-ever invention?

Rosie may seem quiet during the day, but at night she's a brilliant inventor of gizmos and gadgets and dreams of becoming a great engineer. When her great, great aunt Rose comes for a visit and mentions her one unfinished goal to fly, Rosie sets to work building a contraption to make her aunt's dream come true.

Part of the Little People, Big Dreams series, this book offers children the chance to discover the life of Stephen Hawking, the genius physicist and author. When Stephen Hawking was a little boy, he used to stare up at the stars and wonder about the universe. Although he was never top of the class, his curiosity led him to make one of the biggest scientific discoveries of the 20th century: Hawking radiation.

From a very young age, Sue Hendrickson was good at finding things: lost coins, perfume bottles and even hidden treasure. This led to a career in diving and palaeontology and in 1990 she found Sue the T. rex, the largest and most complete T. rex skeleton ever unearthed.

Cool Architecture: 50 Fantastic Facts for Kids of All Ages
By Simon Armstrong

Cool Architecture is a perfect introduction to what's cool about the fascinating world of architecture. Learn about all kinds of buildings the simple dwellings created by the earliest humans to today's most innovative buildings, and the personalities that created them.

A part of the Top 40 Famous series, this book introduces readers to the lives of Elvis Presley, Bob Dylan, The Beatles, Madonna, Beyoncé, Jimi Hendrix, David Bowie and many other rock and pop legends, focusing on key aspects such as genre, look and famous performances.

Politics for Beginners
By Louie Stowell

On what can be a confusing industry to understand and aspire to work in, this book offers a no-nonsense guide to what politics is all about. Topics covered include political systems, elections, voting and government and issues including feminism, human rights, freedom of speech and fake news.

Get Coding!
By Louie Stowell

Through six missions and bite-sized chunks, this book will teach your child how write code, then build their own website, app and games using HTML, CSS and JavaScript and become a technology star of the future!