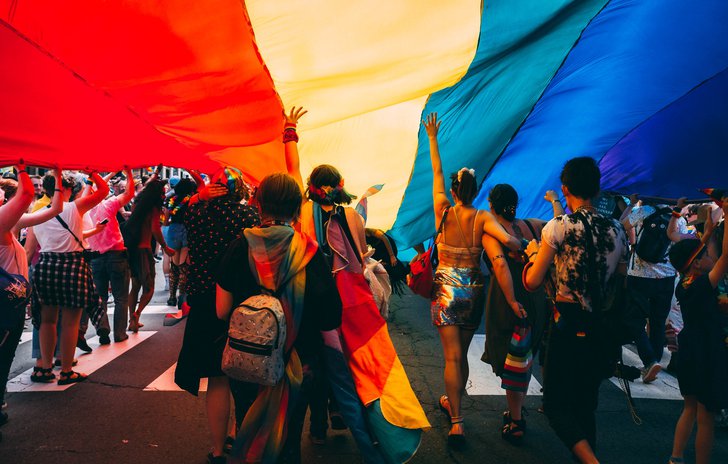 The books on this list will help you learn about queer history and explore queer stories. Some of the titles deal with complex concepts and contain some explicit content.

Laura Dean Keeps Breaking Up with Me by Mariko Tamaki

Laura Dean, the most popular girl in high school, was Frederica Riley's dream girl: charming, confident, and SO cute.

There's just one problem: Laura Dean is maybe not the greatest girlfriend.

This Book is Gay by Juno Dawson

A funny and pertinent book about being lesbian, bisexual, gay, queer, transgender or just curious - for everybody, no matter their gender or sexuality.

A collection of indigenous Native American science fiction and urban fantasy stories focusing on LGBT and two-spirit characters. These stories range from a transgender woman trying experimental transition medication to young lovers separated through decades and meeting far in their own future.

How Much of These Hills is Gold by C Pam Zhang

This is the story of two immigrant teenage siblings making a brutal journey through America after the unexpected death of their sole parent. Grainy, bold and adventurous, Zhang not only channels the Wild West of grainy pulp films, she also stays true to the gender fluidity of her characters.

Many of the poems in this collection reflect on inheritance: the past that Chan inherits from her mother, and inherited expectations of sexuality and gender. Chan shows that embracing queerness can mean challenging expectations, with poems that map the challenges of building a queer future.

When Patsy leaves her daughter in Jamaica and moves to New York, she sets the scene for their independent quests for happiness. Patsy yearns to be reunited with Cicely, her oldest friend and secret love, but Brooklyn is not all Cicely described and Patsy has to learn to navigate womanhood and life as an undocumented immigrant.

In this tender story of love, grief and memory, a young trans woman meticulously picks through a fictional TV show called Little Blue, eventually writing an encyclopedia in a desperate effort to make sense of losing her friend Vivian.

Surge draws a line from the Grenfell fire to a historic fire in New Cross in 1981, in which thirteen young black people were killed. Where poetry meets dancehall rhythms and the music of Jamaican patois, you only need to watch a few videos of Jay Bernard performing these poems to realise the heart they put into writing this extraordinary collection.