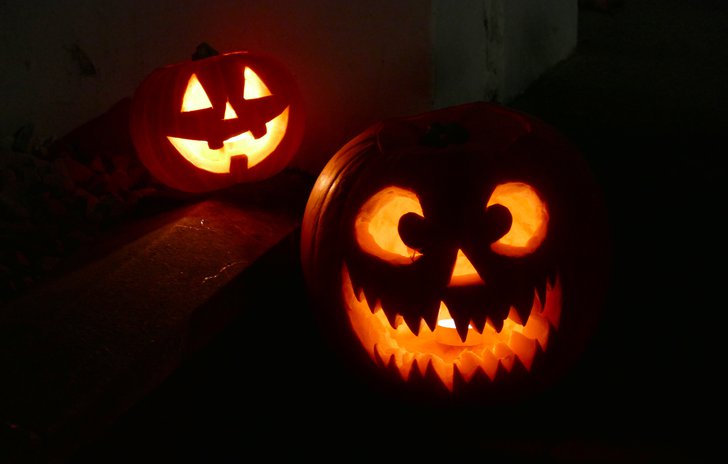 We're giving away 45 spooky books this Halloween! Whether you're interested in creepy creatures, ghoulish ghosts or wicked witches, we've got something perfect for you.

Enter our competition and enjoy a spooky storytime with your child this Halloween.

By Michelle Harrison and Elissa Elwick

In the middle of winter, three kittens are born in a barn. Two are ordinary, but the third, jet black and born on the stroke of midnight, is brimming with magic from whiskers to tail...

We have three copies to be won, courtesy of Little Tiger.

World of the Unknown: UFOs

From flying saucers and supersonic spaceships, to alien encounters and famous fakes, find out all about UFOs throughout history. This book is perfect companion for any space enthusiast.

There are copies to be won, thanks to Usborne Children's Books.

By Lesley Sims and David Semple

It's Halloween and Parakeet is busy carving pumpkins and icing spooky treats. But when her friends come to call, they get a shock. Is that a GHOST who answers the door?

You can win one of three copies, courtesy of Usborne Children's Books.

Are You There Little Bat?

By Sam Taplin and Essi Kimpimaki

Little bat is hiding! Your child will love peeping through the holes in the pages of this picture book in search of the hidden bat.

Get your hands on one of three copies, courtesy of Usborne Children's Books.

The Monstrous Tale of Celery Crumble

Celery Crumble just won't say sorry, no matter how horrid she has been. Not even if she grows boils on her back and claws on her toes! This book is perfect for naughty children everywhere!

Win one of three copies, thanks to Oxford University Press.

Twins, Victoria Stitch and Celestine, are denied their royal birthright. Celestine accepts the decision with good grace, but Victoria Stitch is consumed with her obsession for power. Could it be possible to break free of the role you have been given, rewrite your story, and change your own destiny?

Win one of three copies to be won, courtesy of Oxford University Press.

Get ready to be goose-gruggled and fluckgungled with disgusterous, rotsome and repulsant words (and much more). You can have fun with Roald Dahl's language and the brilliant Quentin Blake's illustrations while discovering how language works.

There are three copies to win, courtesy of Oxford University Press.

From magic carpets and wands to unicorns, potions, creams and lotions, Paul Cookson's brewing a spell of fantastically magic poems.

We have three copies to win, courtesy of Bloomsbury.

By Neil Gaiman and Chris Riddell

Long John has a whole crew of wild pirates in tow, and - for two intrepid children - he's about to transform a perfectly ordinary evening into a riotous adventure beneath a pirate moon. It's time to make some pirate stew...

There are three copies to be won, courtesy of Bloomsbury.

Welcome to Spooky School! It's the scariest school around, where all the creepiest creatures come to dust off their skills and become the best they can be. Join your friends and learn how to fly like a wicked witch on a broomstick, howl like a werewolf and jiggle like a skeleton to all the best Halloween tunes.

Get your hands on one of three copies, courtesy of Bloomsbury.

Tiga Whicabim doesn't know she's a witch. Or not until a fabulous fairy shows up and whisks her down the sink pipes to the fabulous witch world of Ritzy City to compete in Witch Wars, a competition to become Top Witch!

There are three copies to be won, courtesy of Bloomsbury.

By Jenni Jennings and Hannah Peck

Malice is from Underland, land of sorcery and spooks. But, her family live in Topside and mischief is their business. The business of mischief is a very serious matter! Packed with spooky characters and warm-hearted adventure.

We have three copies to win, thanks to Scholastic.

Morgan Charmley is finding it very difficult to keep her witch powers under control and undercover at school. With a fellow secret witch trying to sabotage her and a confusing friendship with a sworn-enemy warlock to navigate, the girl who can spark magic with a click of her fingers knows that trouble always follows fast!

Win one of three copies, courtesy of Scholastic.

Jake and the other finalists in a writing competition have been invited to a stately house for a tour like no other. As their guide leads them through grand rooms, hidden nooks and magnificent grounds, they hear the stories of seven ghosts who haunt the halls.

There are three copies to be won, courtesy of Barrington Stoke.

A Most Peculiar Toy Factory

By Alex Bell and Nan Lawson

Shadows of teddy bears flit across windows. Dolls whisper behind closed doors. Something has gone very wrong at Hoggle's Happy Toys. But five years after shutting its doors, the toy factory is opening again, and Tess Pipps has found herself a job there.

There are three copies to be won, courtesy of Barrington Stoke.

Secrets of the Witch

Everything a beginning witch needs to know is contained in Secrets of the Witch. Uncover the meaning and history behind magical tools and symbols such as cauldrons and pentagrams, find out the truths of the Salem Witch Trials and learn about witches in popular culture, from the ancient figure of Circe to Hermione Granger.

Get your hands on one of three copies, courtesy of Quarto Books.

This competition is now closed.

Sign up to our newsletter and get activities for your child's age.